Also, it’s worth noting that Small World: Underground is a standalone sequel that replaces the original Small World. So if you’re buying the game for the first time, get Underground.

There’s a lot of new races and special powers in these expansions that breathe new life into the game and add a little extra complexity to the strategy in the base game. Below is a little more information about each expansion. Also, be sure to check out the free fan-made expansions at the bottom of the article! 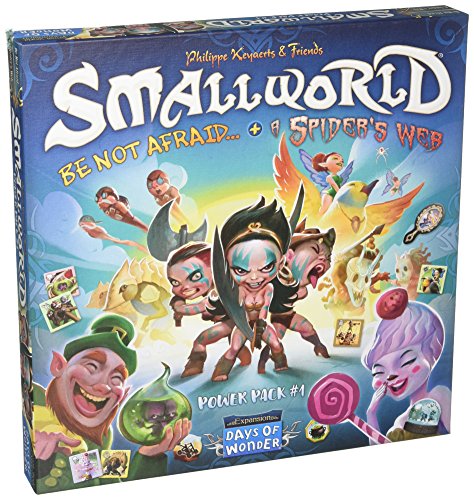 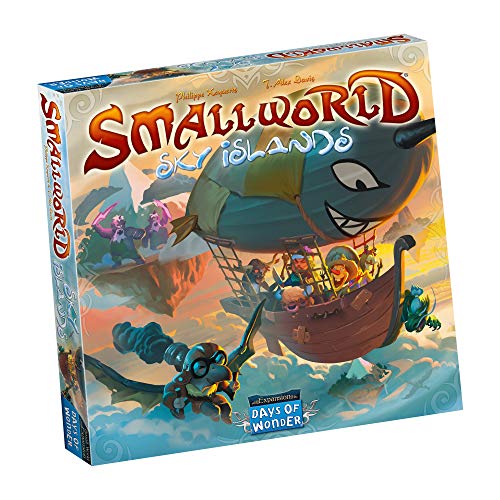 Small World has 5 main expansions. Here is the order they came out in:

Buying them in order isn’t exactly the best way to go but, if you’re not picky about where you start, it’s not necessarily a bad system to use.

Let’s break down what each of these expansions brings to the table and which ones are worth getting first.

Now, this is a pretty unique expansion to the base game. Of course, this expansion adds new races just like all of the other expansions. Here are the races that are added:

There are also 7 new special powers that are introduced. Again, very much the same as what the other expansions offer.

What sets this expansion apart from the rest is a new double-sided board that is introduced. It adds some land to grab which are meant to be islands in the sky (hence, Sky Island). This adds something fresh to the game besides new races and powers. It also makes the game a little more competitive.

I would definitely pick this one up over most of the others since it adds something a little different.

Those expansions add 8 new races and 8 new special powers to the game. Here are the 8 races that are added:

Overall, this expansion is straightforward. It doesn’t change the gameplay drastically but is a great way to breathe new life into Small World if the base game is starting to get dull. This is a solid choice for a first expansion and definitely worth getting if you want to have access to all the races in the game.

The expansion adds a total of 8 new races to the game and 10 new powers. Here are the races it adds:

Again, just like with Power Pack 1, this just adds more of the same for the base game. Presumably, since you’re looking for an expansion you enjoy the base game. So I’d say this is a solid choice for anyone looking to expand Small World.

These expansion races are slightly more interesting than the races in Power Pack 1. So I think I would go with this one first. 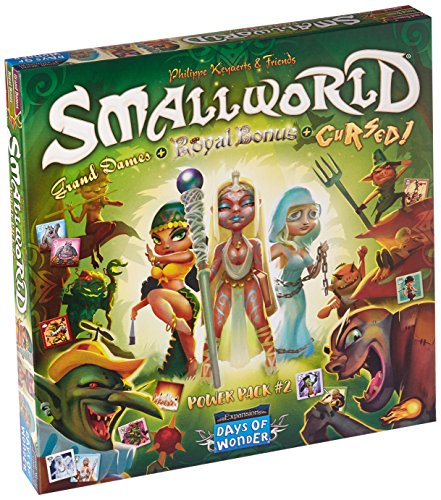 Unlike most of the other expansions to this game, this one doesn’t include any new races or powers. The expansion is solely based around 2 new double-sided boards that add some new territories to the game.

Now, most of the expansions that only add races can get old but this one not including any makes it slightly bland.

The random events and new gameplay based around harbors do add some variation to the game though. This expansion is definitely worth picking up at some point, but probably shouldn’t be the first one you get. 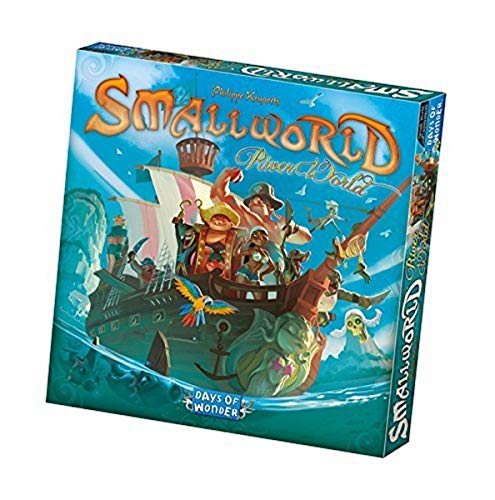 This expansion has a lot in common with the other expansions that only add territory. There are some cool new scenarios that are introduced and it definitely brings some new life to the game.

However, just like the other expansions that only add new territories, it isn’t necessarily the best bang for your buck. It’s worth getting if you’ve already picked up the expansions that are higher on the list. 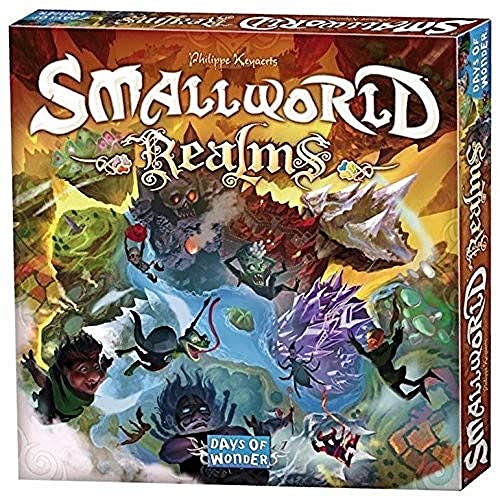 Small World: Be Not Afraid…

This is one of the mini-expansions included in the Power Pack 1. It adds 5 new races to the game:

It also adds 5 new special powers. Overall, this is a solid mini-expansion but you should get the Power Pack 1 if you do not already own A Spiders Web. 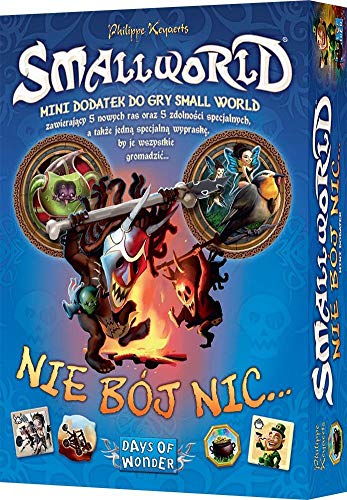 This is the other mini-expansion included in the Power Pack 1. It adds 3 new races:

Along with that, it adds 3 new special powers. Just like with the Be Not Afraid… expansion, the Power Pack 1 is a better buy for the price.

This expansion is straightforward, it’s a scenario for 3-6 players. It’s a solid scenario but there isn’t much else to this expansion. If you already own every other expansion for Small World, this will fill the collection out.

Otherwise, there are better expansions to get for the game. 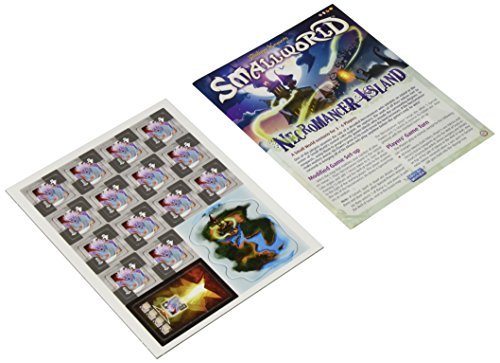 This expansion isn’t useful unless you have both the original Small World base game and Small World: Underground.

If you do have both of those though, this is a great free expansion to print out! It combines both of the boards to make it one big territory. 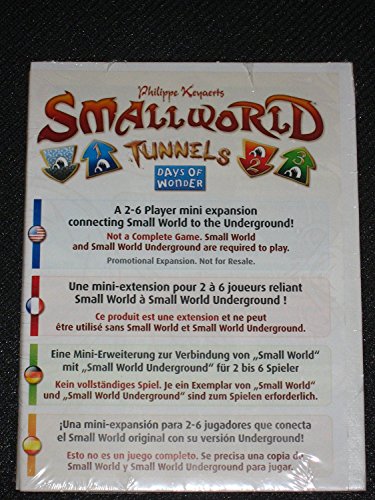 This mini-expansion is included in the Power Pack 2. It introduced 2 new races:

This is one of the better rated mini-expansions but, because it’s in Power Pack 2, there isn’t much reason to buy it alone. 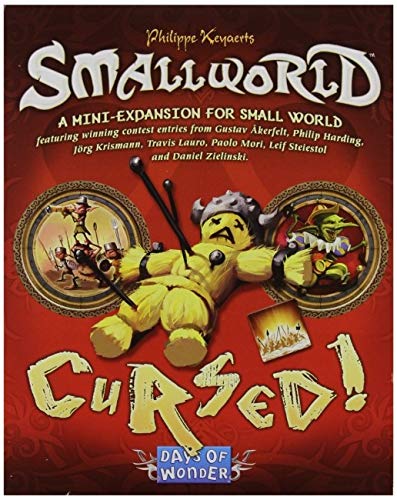 This mini-expansion was also included in Power Pack 2. It included 3 new races:

There were also 3 new special powers that came with the expansion.

Just like with some of the other mini-expansions, since this one was included in Power Pack 2, it is worth it to buy the bundle instead.

This is the third mini-expansion included in the Power Pack 2. It features 3 new races:

It also had 2 new special powers. Although this is another good mini-expansion, Power Pack 2 is a great value compared to buying these individually. 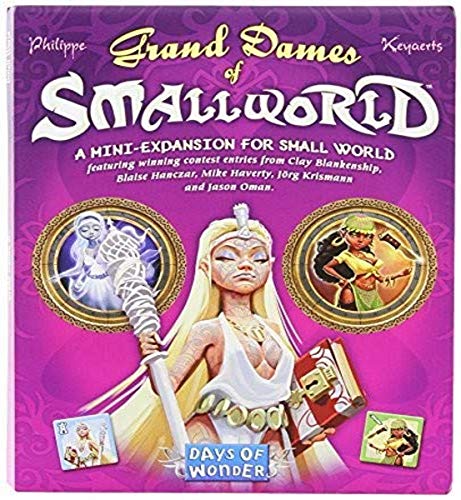 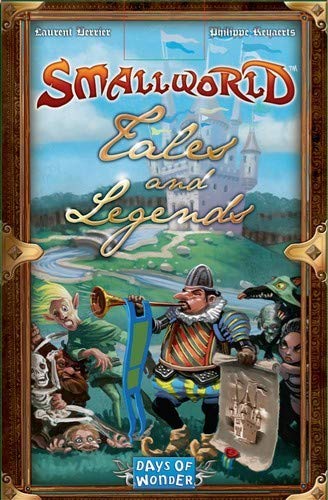 This mini-expansion is very simple: 54 new event cards. Each turn, a new event card is drawn and put into play and you can see what event comes next.

This adds some flavor to the game and you can’t find this particular expansion in any of the expansion packs. So that makes this one worth picking up individually when you’ve got some of the bigger expansions in your collection.

This is a fan-made expansion that can be printed out. It replaces the Small World board with a randomly generated map every time you play.

Along with the variation of the map, the expansion includes a rule set that increases the max player count to 6.

For free, you can’t beat the variation in the maps. It adds a ton of replayability to the game. On top of that, being able to add a 6th player is great. If you’re looking for a free expansion to the game, this would be the first one I would choose. Here’s a link to the expansion.

It also adds 3 new special powers. For a free expansion, this one does a really good job of implementing new races and powers.

Everything seems well balanced and it works with all of the official expansions for the game. Definitely worth checking out if you’re looking to freshen the game for free. Here’s a link to the expansion.

Just like the Community Compendium I, this fan-made expansion adds 3 new races:

Also like the Community Compendium I, it adds 3 new special powers.

This expansion doesn’t seem to be as popular as the Community Compendium I, and there seemed to be a lot of issues for those in the community making it.

Because of that, this one doesn’t seem as well refined as Community Compendium I. However, it’s worth a try if you’ve run out of every other free option. Here’s a link to the expansion.